A Busy Dad’s Cure for Heartbreak, the Dad Bod, and a Fear of Flying 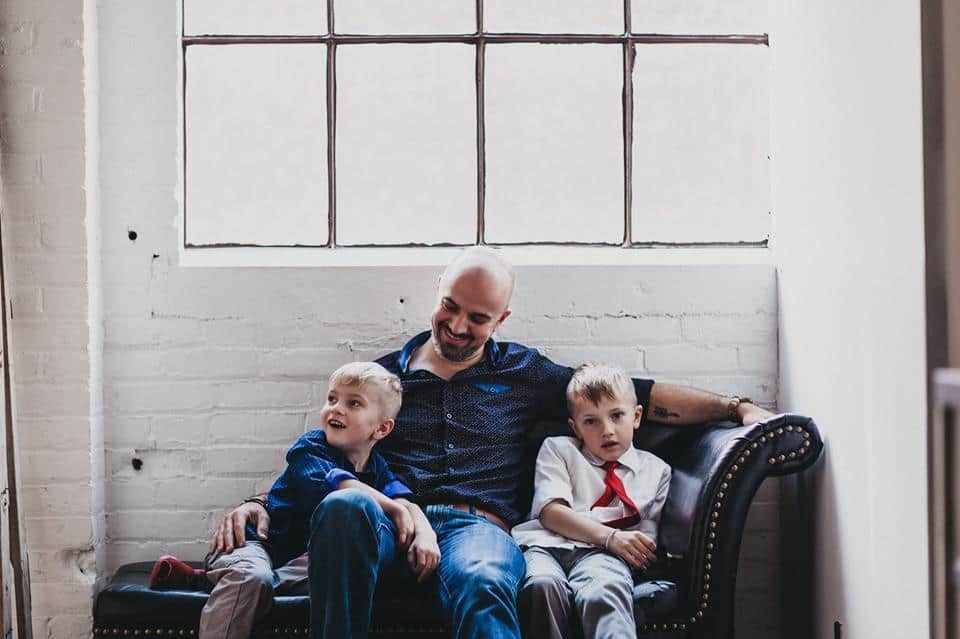 “If [more] information was the answer, then we’d all be billionaires with perfect abs.” – Derek Sivers

My journey with Thrive started before I actually signed up with them. I’d been hearing about this new* thing called Kettlebells. It seemed to fit what I was looking for – interesting, challenging and unique. But I only knew enough to know that if I just jumped into it, I’d probably hurt myself. I did a search for SFG-qualified instructors and up came Francis’ name! I lived in North York at the time, so I made a special arrangement to trek ALL THE WAY down to the Beaches for a single introductory/overview session. Brian & Francis were both there and gave me an assessment before walking me through the basics of a swing and a Turkish Getup. That was it – I was off to the races and I was forever transformed. Before you know it, I was fit, trim and my life was better than ever…

* can you believe it, they’ve only been around a century or two?! Fads these days…

Except … of course not. In fairness to myself, I did my swings & getups longer than I’ve stuck with any other at-home exercise scheme I’ve tried – but in the end, my old habits shone through and the kettlebells I’d bought started gathering dust. Life progressed and I ended up moving down to the Leslieville area a year or so later. Around that time, I was coming to some pretty life-changing realizations.

Admittedly, the motivation for the latter was tied directly to the former. If I lost those pesky pounds that my wife didn’t find attractive, then surely her attitude would magically change and we’d live happily ever after. Right?!

And so, my motivation to take action was born. When considering options, I remembered “hey, weren’t those kettlebell guys around here somewhere?” Sure enough – right where I left them – there was the little hole-in-the-wall I remembered! When speaking to Brian, I was surprised he remembered me. Then again, I don’t suppose too many people are arrogant enough to think they can “learn kettlebells” in one session… But he was very patient and filled me in about what would be involved in joining Thrive, and it seemed to make a lot of sense. The minimalist space really cut down the pressure and the fact that they had kettlebells & TRX straps (“hey, I have those too!”) made it seem like something I could eventually take and run with on my own. I figured I’d give it a chance, stick it out for a couple of months and then take the learnings and finally use my garage gym.

A year and a half later, and I’ve come to appreciate a couple of principles. They’re wonderfully summed up in this article (https://jamesclear.com/best-exercises-basics), but I’ll give you my perspective on each of them.

a) Commit for the long-term

There are quick fixes in life. There’s a reason the idea of “hacking” a system is a popular one in culture nowadays. But if you want real, lasting change … the kind that sticks with you and is resilient … you gotta be in it for the long haul. I’m no expert – but I tend to view it as “easy come, easy go”. If it didn’t take much to reach a goal, then it won’t take much to backslide from it either. But if you’ve put in the time and built the right foundation, your progress will be far more stable and sustainable. Life will inevitably throw pressure in a direction other than where you want to go – with a better foundation, you’ll be far more prepared to withstand it.

b) Set a schedule for your training

Paying for 2 sessions a week meant … I’m going to exercise at least twice a week! Anything above & beyond that is a bonus. But at the VERY LEAST, I’m going to get my ass to the gym those 2 times – which is 2 more times that I was working out before! Sure, I may have felt inspired at other times and may have managed to work out 4-5 times in a week … maybe even for a couple of weeks in a row!! But it never lasted. In the end, consistency trumps intensity (for long-term success).

c) Focus on the best exercises

There’s a reason why there aren’t fancy machines, mirrors and music at Thrive. Brian has crafted an environment uniquely suited for FOCUS. And the best exercises (particularly when starting out) are the simplest. The amount of gear may seem skimpy at first glance, but I promise that you will not go unchallenged. And becoming really good at the basics will open up worlds of opportunity when you start to try new things with your new fitness.

d) Start light and train for volume before intensity

This is where the incredibly knowledgeable and attentive trainers at Thrive really shine. They will challenge you – but they won’t give you something you’re not ready for. By understanding who you are, how you react to stimuli (both psychological and physical), what your goals are, etc – they can build a program uniquely suited for you. Since it’s semi-personal training, you end up getting glimpses of other peoples’ programs and you’ll note some similarities and some differences. You might see others do something flashy and wonder “why aren’t I doing those?!”. Chances are you’re not because they wouldn’t get you where you want to go … or you just aren’t ready for them! I remember when I finally had chin-ups in my program and realizing just how woefully unprepared I would have been for them before that time!

This one could also be titled “be patient, dammit!”. If you’re overweight and/or out of shape, the desire is often to “get fit quick”. That must mean if you go harder, sooner you’ll see results faster, right? Probably not. You’ll likely just end up hurting yourself.

The other key word here is “progress”. This was a major light bulb that went off for me (probably much later than it should have) – what we do at Thrive is TRAINING … not EXERCISING. You could do almost anything that gets your heart rate up and call it “exercise”. There are mini-gyms and mega-gyms that offer all sorts of contraptions and classes that provide fun, interesting and challenging exercise. You’ll never do the same thing twice and you’ll be “fitter” than you were before (hey, anything is better than nothing – don’t get me wrong). But will you know for sure how much fitter you are? And will you know whether you’ve protected yourself against injury and asymmetry? While “fun” places may stave off boredom, it’s also tough to see how far you’ve come. Making a point of having a plan and tracking your progress is where the real meat is. Which leads to the next point…

If you never do the same exercise twice, how do you know if you’ve improved? Sure, you were breathless and sweaty each time – but is that what you needed? At Thrive they do an FMS assessment before you start so that you have a quantitative starting point. Thrive programs are built to progress you at the speed you need to go … and you’ll record it all for your own satisfaction and viewing pleasure. It’s a wonderful shot to the ego when you go back and look where you started and where you are 6-12 months later.

So, where am I now relative to those initial goals? Probably not where you’d expect. Well, not if you’re a Happily Ever After sort of person. Soon after I joined Thrive, my marriage dissolved entirely. At that point I had to make a very conscious choice to make – “f*** it, what’s the point?” or “keep going”. And thankfully I made the right one. I realized that I wasn’t doing this for my wife – I was doing it for me. Having a dad-bod probably didn’t help my marriage – but it wasn’t the reason it failed. However, the physical changes I was creating for myself by implementing the above principles (with Thrive’s help & guidance) … they were important to ME. I was realizing that I can control my fate – I’m not beholden to anyone else. Feeling better in my own body has opened me up to new experiences I’d never have considered before.

Which is how I got into Acroyoga! Thanks to the strength, flexibility and confidence I gained from Thrive, it turns out I’m a pretty good Base (and very occasional flyer). Before Thrive, there’s little chance I’d have taken the leap and gone to something like this on my own. But I’m so happy I did. I’ve developed a new circle of friends, tested the limits of my newfound strength in all sorts of different ways and am having a ton of FUN.

My story isn’t over. My kids now have a dad who can challenge them in monkeying around on the playground. When wrestling on the couch, I’m able to take them both on without fear of hurting myself (other than the occasional elbow to the face). And if I have to re-enter the world as a single man, I’d much rather do it with some semblance of abs (rather than the flabby gut I had before).

Gaining new strength and learning new skills has opened my eyes to a world of possibilities – I look forward to where it takes me.